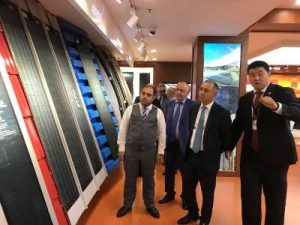 YEREVAN. – A delegation from Armenia, and led by Minister of Energy Infrastructures and Natural Resources Artur Grigoryan, is in China on a working visit.

During his trip, Grigoryan held meetings with the representatives of the companies of China’s energy sector, the Ministry of Energy Infrastructures and Natural Resources informed Armenian News-NEWS.am.

The minister visited the Hanergy company, which manufactures solar cells. They discussed the opportunities for launching such production in Armenia. In addition, a preliminary agreement was reached toward developing an investment program.

Along the lines of his visit, the Armenian minister met also with the representatives of China Railway No. 3 Engineering Group Co., Ltd., which provides services in various branches of energy. They informed Grigoryan that their company looked toward investing in Armenia’s energy sector.

In a separate talk, representatives from Energy China company expressed an interest in investing in Armenia’s infrastructure.

In addition, Artur Grigoryan met with the director of XY International Group, which specializes in the construction of gas power plants, as well as renewable energy. The minister expressed an interest in the chances of building a combined-cycle gas and steam power plant in Armenia.